“Awesome!”… One word, shouted out loud in celebration by a singer from Exeter House Special School following their performance of ‘We Have a Voice’ encapsulates two wonderful aspects of La Folia’s 30th anniversary concert held at St Martin’s Church on Saturday 15th October. The exciting and powerful performance from the youngsters, all of whom have special needs and the sublime music making from the orchestra, once more delighting the Salisbury audience with an exciting programme of the very highest calibre.

Salisbury has been privileged to enjoy thirty years of world-class performances by this group of musicians, under the baton of the internationally acclaimed composer, performer and director Howard Moody.
Originally The Sarum Chamber Orchestra, the group has diversified over the years and now, as well as continuing to delight audiences with orchestral concerts, it works with young people all over the South of England, submerging them in magical musical experiences in a range of bespoke projects.

On Saturday night we were treated to a celebratory cross-section of La Folia’s work. The concert opened with the young people of Exeter House accompanied by the orchestra singing ‘We need a System’, a piece composed in a collaborative project using the students’ own poetry and melodies. To quote Howard Moody “This is their music – every word – every note. It comes from their imagination.” Their performance was electrifying, powerful, uplifting and with a quality of tone and delivery which left the audience spell-bound.

From a seamless segue emerged ‘Loose Change’, a composition from La Folia violinist and composer Jeff Moore, haunting melodies from Cello and Violin floating above shimmering strings, beautifully played by the orchestra. Bach’s ‘Concerto for Oboe D’Amore and Strings’ celebrated the return of Salisbury’s own Nigel Shore, who in the thirty years since performing in the SCO’s first concert has enjoyed a world-wide solo and orchestral career. The rich tone of the oboe d’amore balanced beautifully with the orchestra, who treated the music with the delicacy and nuance of a period instrument performance.

The second half of the concert saw the return of Nigel Shore, this time with Daphne Moody in a superb performance of Bach’s ‘Concerto for Oboe and Violin’. Daphne Moody’s violin playing once again wowed the Salisbury audience, as she and Shore crafted beautiful phrases, the third movement left us on the edge of our seats as it sparkled with virtuosity from both players. A surprise rendition of Rachmaninov’s ‘Vocalise’ by Shore was an unexpected treat as an encore to the Bach.

Moira Alabaster’s viola solo in Ulysses Awakes deserves a special mention, a rich depth and beautiful sonority in the melody soared over the orchestra making the most of the superb acoustics in St Martin’s Church.

Tchaikovsky’s Serenade for Strings was in safe hands drawing the concert to a close. The power of the sound, the tone colour and the virtuosity of the ensemble was breathtaking. A fitting end to a superb evening. 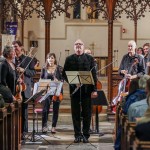 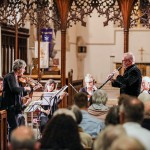