Friends and supporters of La Folia gathered at Odstock Manor on Sunday 1st October to mark the launch of a new season of projects for the Salisbury-based music charity. 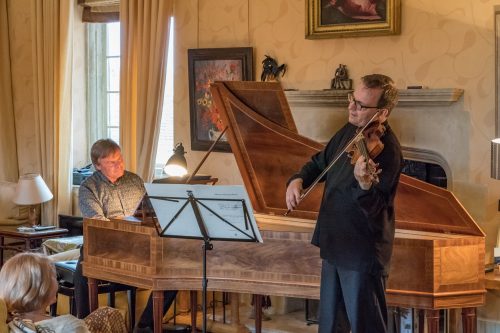 Howard spoke about the approach and aims of the project, describing the pilot workshops that have already taken place in Woodford Valley Primary Academy Resource Base for Autism and Exeter House Special School. Guests were then invited to find out more about plans for the upcoming season through conversations with the La Folia team over tea and cake in the Long Room at Odstock Manor.

In the Sei Solo workshops, students have worked alongside professional musicians to explore Bach’s music for violin and create songs about being alone. This project typifies La Folia’s way of working creatively with young people: aspiring to confront barriers of every kind with a freedom and dynamism that re-defines established ways of working, creates change and ultimately transforms music and people.

Howard Moody explained: “In a society where “going it alone” seems to be creeping into every pore, it feels ever more important to ensure that the most vulnerable young people find an outlet through which they can express their own power, feelings and needs, and experience a sense of togetherness. For La Folia, our work with special needs groups has become one of our most potent responsibilities, especially with the legacy of our ground-breaking large-scale projects that have included The Ring Cycle, Magna Songs and Evening Songs.”

The other key project in La Folia’s forthcoming season is Continuing Songs, in which young people from Wiltshire College, Salisbury will work with professional musicians to record and promote their own album of music.

Howard Moody described the rationale behind Continuing Songs: “As our core group move up to Salisbury College from Exeter House School, we want to enable them to continue their extraordinarily powerful outbursts of creativity, offering them regular opportunities to participate in live music through the singing trust as they move into the wider world.”

La Folia have a combined fundraising target of £40,000 for Sei Solo and Continuing Songs and are working to secure this from trusts and foundations as well as individual donations. To discuss how you could support this valuable work, please contact Sue Kent, General Manager on sue.kent@lafoliamusic.org.

La Folia has been given two bottles of Sei Solo wine, which has come from the winery of Spanish wine-maker Javier Zaccagnini. The Sei Solo wine is a tribute to Johann Sebastian Bach, Javier’s favourite composer, with the handwriting of Bach’s original manuscript reproduced on the label of each bottle.

La Folia is delighted to present two bottles of 2013 Sei Solo wine for auction. All money raised will go towards the Sei Solo project. The auction will close at 14:00 hours on Friday 8 December 2017. Bids can be placed by following this link.