This summer, La Folia in association with Wiltshire Creative will present two performances of PUSH, an opera by Howard Moody featuring internationally-renowned soloists, a community chorus of over 100 children and adults and a professional orchestra.

Salisbury-based music charity and production company La Folia is delighted to stage PUSH as part of the August bank holiday festival marking the launch of Wiltshire Creative, which has been formed by the merger of Salisbury Playhouse, Salisbury Arts Centre and Salisbury International Arts Festival. The two performances of PUSH will be in St Thomas’s Church at 5pm and 8pm on Saturday 25 August 2018.

The opera tells the story of Simon Gronowski, who was pushed from a train bound for Auschwitz by his mother in 1943 in order to save his life. He survived, but didn’t speak of his experiences for many years. Salisbury-based composer Howard Moody met Simon in Brussels and, after hearing his extraordinary story, promised that it would be the subject of his next opera. PUSH was subsequently commissioned in a partnership between Glyndebourne Opera and Battle Festival to mark the 900 th anniversary of the Battle of Hastings and was premiered in Sussex in October 2016. In January 2018, PUSH was performed in Chichester Cathedral to mark Holocaust Memorial Day.

The Salisbury performances in St Thomas’s Church will be staged by Glyndebourne director Simon Iorio, with composer Howard Moody as musical director. The three soloists are James Newby (Glyndebourne, BBC Proms), Matthew Stiff (Royal Opera House, English Touring Opera)  and Tereza Gevorgyan (Opera North, Glyndebourne). The orchestra is from La Folia and the performances will feature a vast community chorus of over 100 adults and children. 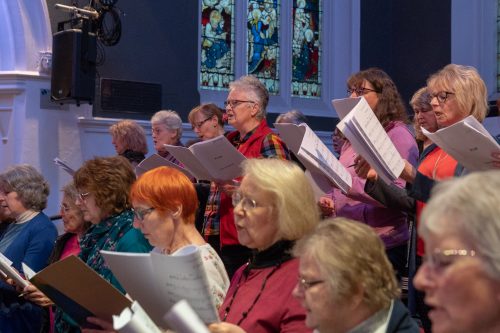 Despite the sombre story, PUSH is packed with memorable scenes and rousing tunes, with a strong message of hope and belief in the ‘power of human goodness’. Simon Gronowski himself will be in Salisbury for the performances and there is an opportunity to hear his story first-hand in his talk at Salisbury Methodist Church at 11am on Saturday 25 August.

Tickets for PUSH (£20/£10 under-18s) and the talk with Simon Gronowski (£10) will be available to the general public from 5 June from Salisbury Playhouse, either in person at the box office, by calling 01722 320333 or online at wiltshirecreative.co.uk.